When Nilesh Dayal and his wife, Kristal Jackson Dayal, built their 9,400-square-foot Mediterranean-style house in Houston in 2016, they created a stately home office they expected to use for after-dinner work, nighttime calls to foreign time zones and occasional client meetings.

Now they are in there all day long.

“I have been on calls since 7 a.m. and probably will be into the wee hours of the evening,” says Mr. Dayal, partner at L.E.K. Consulting, a global management-consulting firm, where he heads the oil and gas practice. For remote work in the current health crisis, he says, it has been essential to have a dedicated workspace away from the household and family, which includes son, Dillan, 10, and baby, Hope, born in April. 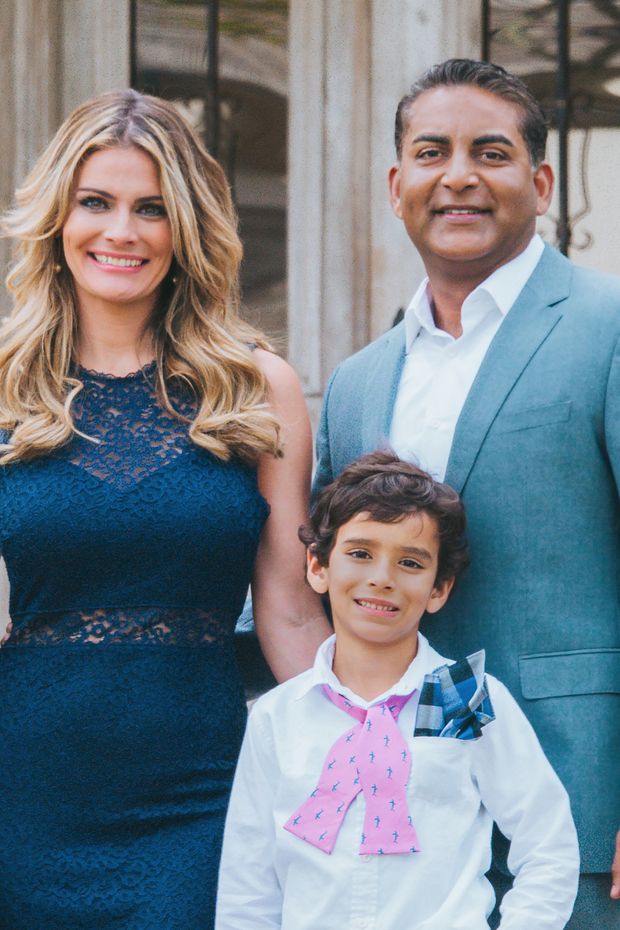 The 400-square-foot office in his $3.5 million home also gives Mr. Dayal, 48, the space to walk around while talking on the phone—one of his habits.

For millions of Americans now working remotely, the home office is the room where it happens. While some professionals work from their couch, surrounded by kids and commotion, most cherish—or crave—a separate space with a door, a desk and few distractions.

For home buyers, real-estate professionals say, home offices are the next room boom.

“Traditionally, kitchens and master bedrooms were the most important spaces buyers looked at,” says Robin Kencel, a licensed broker with Compass in Greenwich, Conn. “Now they’re asking, where am I going to work?”

Remote work was on the rise well before the coronavirus pandemic. In 2018, the latest figures available, some 24% of those employed worked at least part of the time from home, according to the Bureau of Labor Statistics. Under the Covid-19 quarantine, that percentage has surged. Even senior executives, long reluctant to leave the C-Suite, now realize they can work from home and, economists predict, some may want to keep that option, changing homes and floor plans of the future.

Home listings that include the word “office” have increased every year since 2017, according to real-estate listings website Realtor.com. ( News Corp., parent company of The Wall Street Journal, also operates Realtor.com under license from the National Association of Realtors.) On average, homes with an office sell nine days faster and fetch a price-per-square-foot premium of 3.4%, according to the website.

“Traditionally, kitchens and master bedrooms were the most important spaces buyers looked at. Now they’re asking, where am I going to work?”

The premium is declining, the site notes, as more homes have an office or a flexible space that can become one. In a survey conducted by Realtor.com in the first two weeks of April, 6% of respondents said the home office was the most important feature in their house. For their next house, 8% said they want more doors and separation between rooms.

“It is highly likely that going forward, there will be a premium on residential environments that provide a dedicated quiet workspace,” says Stuart Gabriel, director of the Ziman Center for Real Estate at UCLA. 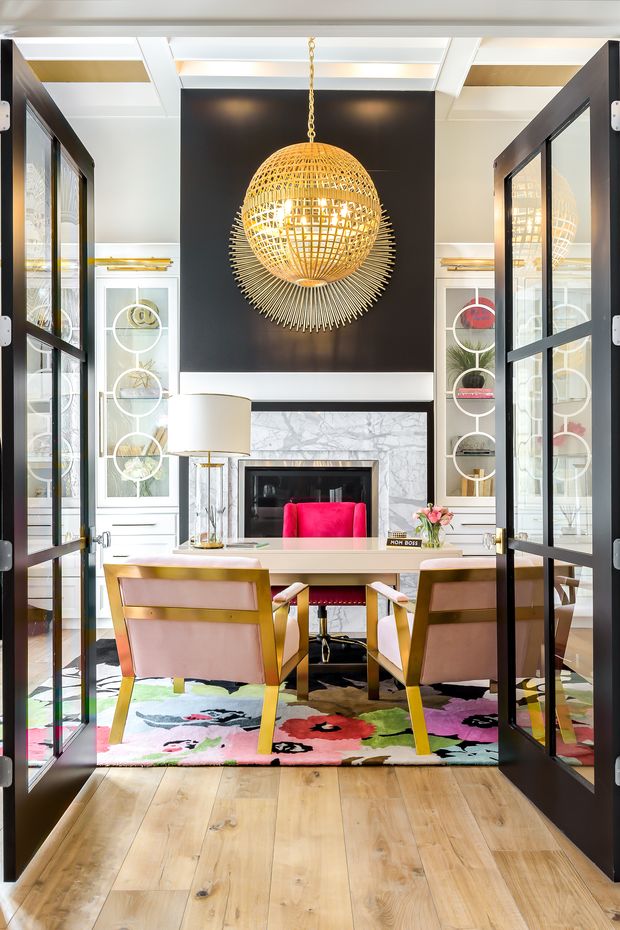 High-end home offices now come with cutting-edge technology and a sleek design that seamlessly blend into the style of the house—often with large windows for maximum daylight, storage for cables and clutter, and big fireplaces for comfort away from computer screens.

In the Dayals’ six-bedroom, 10-bathroom home, the main office has a 16th-century Italian stone fireplace from Ancient Surfaces, a New York-based vendor of architectural antiques. In the evening, Ms. Jackson Dayal, 46, owner of interiors firm Kristal Michelle Designs, often joins her husband by the fire for reading with the children. She especially likes the cross etched in the stone mantel.

“It represents the foundation for our family and our faith,” says Ms. Jackson Dayal. “A home office should be personal and reflect you and your family.” 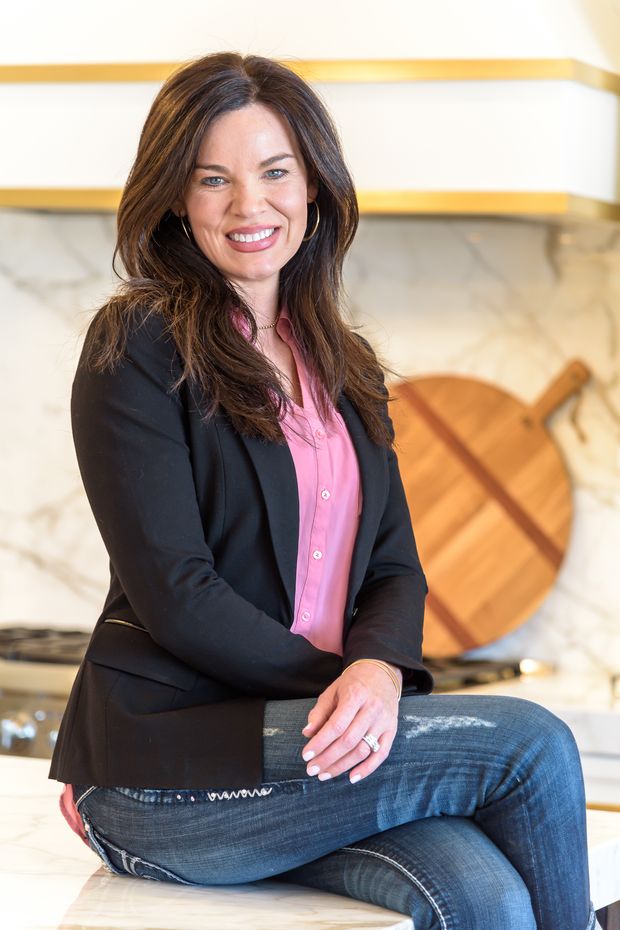 In addition to the $20,000 fireplace, it has a $20,000, 18th-century Italian desk, reclaimed wood floors and walnut paneling with an antique finish. Large bronze doors leading to the area once belonged to Harvard University. Floor-to-ceiling bookshelves open to the hidden, 80-square-foot office behind. There, the Dayals keep paperwork and a printer, a desktop computer with multiple screens and photos from Mr. Dayal’s alma mater, the University of Michigan.

When Jared and Heather Osmond built their 13,000-square-foot, six-bedroom house in Alpine, Utah, in 2018, they also installed two home offices: his and hers. Mr. Osmond is a real-estate developer, amateur musician and part of the musical Osmond family popular in the 1970s.

He and Ms. Osmond, owner of Osmond Designs, an interior-design firm with three furniture stores in the Salt Lake City area, had different ideas about the design of the house. Mr. Osmond, now 49, wanted a contemporary, minimalist, “fishbowl kind of house,” Ms. Osmond, 44, recalls. She preferred a classic family home with a warm, comfortable feel. They eventually compromised: She got her way on the house, while he got a Harley-Davidson motorcycle he had coveted.

In Mr. Osmond’s office, he keeps another Harley—vintage—along with an antique gas pump and a worn leather jacket hanging on a hook on an exposed brick wall. Dark bookshelves, leather armchairs and professional awards give the space an industrial, masculine vibe, compared with Ms. Osmond’s elegant, feminine office across the hall.

There, the desk has a cream lacquer finish and gold legs. The desk chair is fuchsia. A rug by fashion brand Kate Spade is boldly flowered. Ms. Osmond added pink velvet armchairs with gold armrests; a gold, globe-shape chandelier; and gold accents on white custom cabinetry. 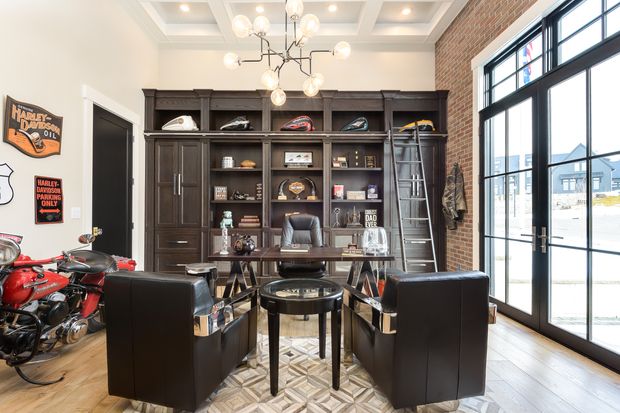 Jared Osmond’s $25,000 home office, across the hall from his wife’s workspace, was given an industrial, masculine style with darker bookshelves and a vintage Harley, which cost an additional $25,000.

Inside the glass cabinets, Ms. Osmond stores personal pieces, such as the crown and sash she wore when winning the Mrs. Utah competition, a framed flag that draped the coffin of her late father, a firefighter in Provo City, and 16 tiny ceramic cows that were part of Mr. Osmond’s marriage proposal.

“It’s important to be in a space that makes you happy,” says Ms. Osmond, who spends up to eight hours a day in her home office.

The Osmonds paid $405,000 for their 1-acre lot nestled against the mountains and $3.7 million on construction of the house, interiors and landscaping. They live there with daughters Alexis, Paige and Jocelyn, and son Landon, who shoots hoops on the home’s indoor basketball court. The two offices cost a combined $35,000. Mr. Osmond’s $25,000 vintage Harley cost as much as his office.

In Pennsylvania, architect Robert Gaskill, who owns Gaskill Architecture in Portersville and has a background in educational design, says natural light and a view of nature enhance creativity and performance.

For the home office of author Nikki Hopeman in nearby Fox Chapel, he designed large windows with a view of the wooded, 30-acre lot. Ms. Hopeman, who writes horror fiction, and her husband, Ward Hopeman, a software developer, bought the land for $1 million in 2014 and built a 5,000-square-foot, three-bedroom ranch house with a 600-square-foot, two-bedroom guesthouse.

Ms. Hopeman worked from home even before the lockdown and knew her office would need space for roughly 1,000 books and would be a refuge for undisturbed reading and writing. 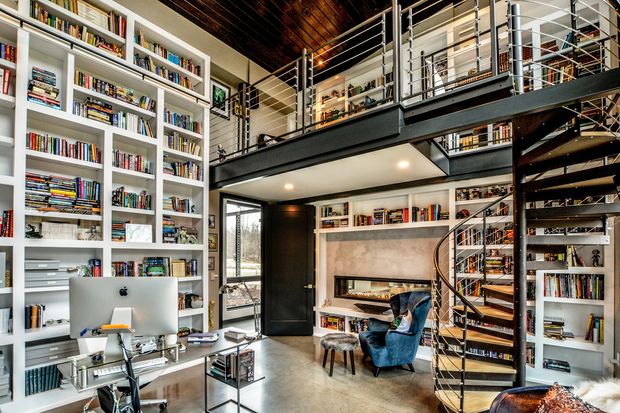 Author Nikki Hopeman wanted space in her $95,000 office that would hold about 1,000 books and that would be a quiet place to write her horror fiction.

She decided, along with Mr. Gaskill and Kristen Hancock, principal at Pittsburgh-based design firm Lmntl Dsgn, to create a light-filled space in line with the home’s industrial contemporary style, but she added feminine touches: a slender metal desk and white, floor-to-ceiling shelving reminiscent of grid-style paintings by Dutch artist Piet Mondrian.

How have you tricked out your home office space during quarantine?

In a nod to Ms. Hopeman’s genre, a partial skeleton is sitting next to the door, while the single drape by the windows is tied back with a zombie hand.

Ms. Hopeman’s favorite part of her home office is a spiral staircase that leads to a loft, where she goes to read and, she jokes, hide from the family. That family includes sons Jacob, 19, and Wesley, 17, three Welsh Cardigan Corgis, four goats and 12 chickens.

With the whole family home during the quarantine, Ms. Hopeman shuts the door more often than usual. “They’re picking up on the idea that when the door is closed, don’t even knock because mom is busy doing something,” she says.

Jamie Daugaard’s home office doesn’t have a door. When Mr. Daugaard, principal at Centre Sky Architecture in Big Sky, Mont., designed a house for himself at the Spanish Peaks Mountain Club in the area, he was already working from home a lot and wanted his workspace to be open to the main living area. 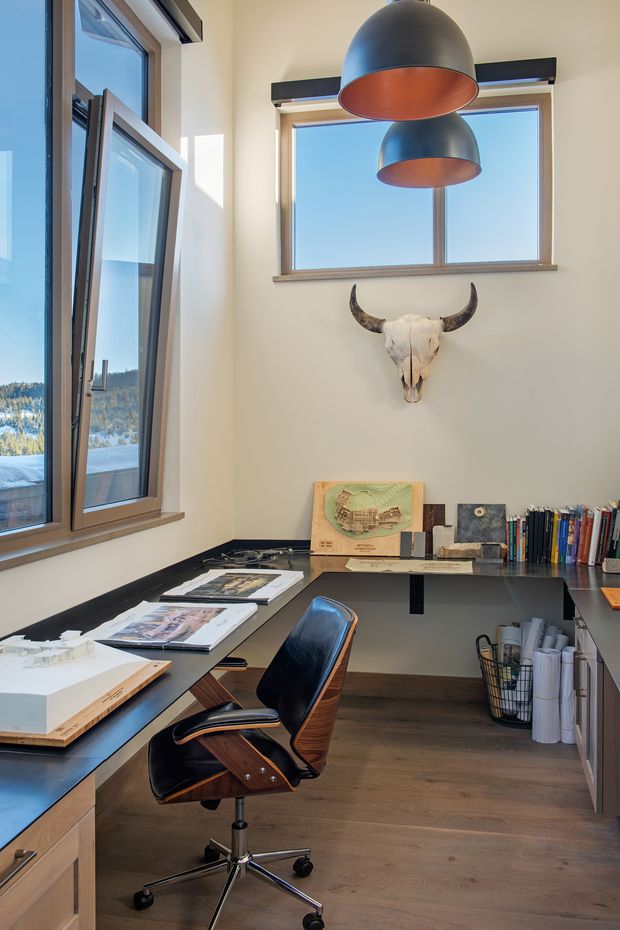 Architect Jamie Daugaard wanted a home office that had views of the Gallatin mountain range outside his Montana home and that inside was within earshot of his family’s living areas.

Now that Mr. Daugaard spends some 10 hours a day in the office, he appreciates having a sweeping view of the Gallatin mountain range. He also likes that he can hear his sons Caden, 17, and Ryken, 14, doing their homework on the kitchen island downstairs. “It’s comforting to me hearing their voices,” he says.

In Mr. Daugaard’s 104-square-foot, $24,000 home office, the walls are lined with a long, built-in steel desk where he spreads out plans, drawings and models. The steel shelving has pockets for storage, and a laptop docking station connects to a 31-inch desktop computer.

Mr. Daugaard, 52, and his wife Heather Daugaard, 47, a nurse, completed the 4,600-square-foot mountain-modern house with four-bedrooms and a bunk loft in 2018. The $3 million house, surrounded by aspen groves and a conifer forest, overlooks the South Fork Stream at Spanish Peaks, where houses cost between $2 million and $6 million.

Like his peers, Mr. Daugaard says that home offices are changing. At a minimum, they now have natural light, flawless connectivity and an ottoman for work on a laptop. “There is less of the traditional office space with a mahogany desk,” he says.

Write to Cecilie Rohwedder at cecilie.rohwedder@wsj.com