By: CONOR DOUGHERTY It’s a familiar conversation among couples on the nation’s coasts: Can you imagine what kind of house we could get if we could keep our jobs and move somewhere cheaper? That idea hangs over Wednesday’s Journal article about how some of the nation’s frothiest housing markets are easing back a bit. As the story notes, there’s a fear among many realtors — especially those on the coasts — that the real estate market has come back so swiftly that homes are suddenly unaffordable again. 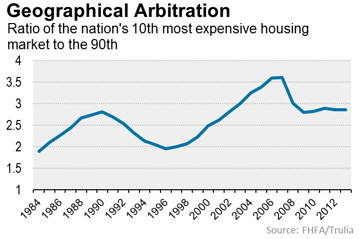 The idea of a widening price gap was even more evident in the National Association of Realtors’ annual affordability survey, which it published Tuesday as part of its fourth quarter release on Metropolitan home prices. For most of the nation, homes are extremely affordable, even among those in the struggling middle class. But the coasts — and in particular California — have reverted to an old pattern of having too many people, not enough homes and price growth that outstrip income growth. Renters have it even worse. After Honolulu, the nation’s least affordable markets were Orange County, San Jose, San Francisco, New York, Los Angeles and San Diego, according to NAR. All had an affordability index lower than 100, which is the level at which a median-income household has exactly enough income to qualify for a purchase of a median-priced existing single family home. Not everyone loves NAR’s affordability index — by that metric, there was only one month during the housing bubble when homes were considered unaffordable — but it gives a sense of how things have changed and where they’re going. Discovering that California is 1) beautiful and 2) expensive is a generational rite that happens over and over again. But the affordability data beg the question: Did it always cost an insane amount of money to live in California? And is the city to city disparity in home prices growing? To answer this question we looked at some data provided by Jed Kolko, chief economist of Trulia. As a proxy for geographical price disparities, he used FHFA regional home price data to calculate a contemporaneous ratio of the nation’s 10th most expensive home market to the nation’s 90th expensive home market. “In 2013, for instance, the 10th most expensive metro (which was Boston in 2013) cost 2.86 times per foot as much as the 90th most expensive metro (which was Cincinnati in 2013),” Mr. Kolko wrote in an e-mail. As the graph shows, the nation’s geographical home price gap was widest in 2007, the peak of the housing bubble. It narrowed during the housing bust — in part because prices cratered so much in expensive markets like California — and has now stabilized. The gap grew a tiny bit wider last year, and many of the most expensive markets in 2013 saw outsized increases, as measured by Trulia’s home price monitor. So, yes, it’s always been more expensive to buy a home in the nation’s priciest home markets. But after a brief respite during the housing bust, the cost of not living somewhere else appears to be widening once again. Source: http://blogs.wsj.com/economics/2014/02/13/gap-between-most-least-expensive-housing-markets-still-wide/
« Previous  |  Next »