Happy Back to the Future Day!

'Back to the Future' Day: Time is in flux, and the 'Future' is today

(CNN)"Back to the Future" Day has finally arrived.

What did 'Back to the Future II' get right?

The plot gets tangled -- by fixing one thing, McFly and Doc Brown (and the villainous Biff Tannen) create a number of new messes -- but what remains is the film's vision of a year that was still more than a quarter-century away when the movie was shot and released in 1989. The entire trilogy is even being rereleased Wednesday, so you can see for yourself.

The film's record isn't bad, given that director Robert Zemeckis wasn't pleased with setting part of "Back to the Future II" in 2015.

"I always hated -- and I still don't like -- movies about the future," he says in a new book, "Back to the Future: The Ultimate Visual History." "I just think they're impossible, and somebody's always keeping score."

In the Internet age, Zemeckis has grounds for concern. Over the past few years, Photoshopped images of "Future's" DeLorean time machine have popped up on the Web, insisting that TODAY is "Back to the Future Day." And now that the day has actually arrived, there have been countless articles (like, frankly, this one) and videos about what the film and its screenwriter, Bob Gale, got right about 2015.

The story behind the car that made time travel stylish

Coincidentally, perhaps the most important invention in the film is one behind the scenes: the VistaGlide motion-control system, a computer-operated camera operation that enabled Michael J. Fox to seamlessly share all those scenes with himself. The software was written by an Industrial Light & Magic developer, Bill Tondreau, specifically for the movie and was a milestone in moviemaking technology. 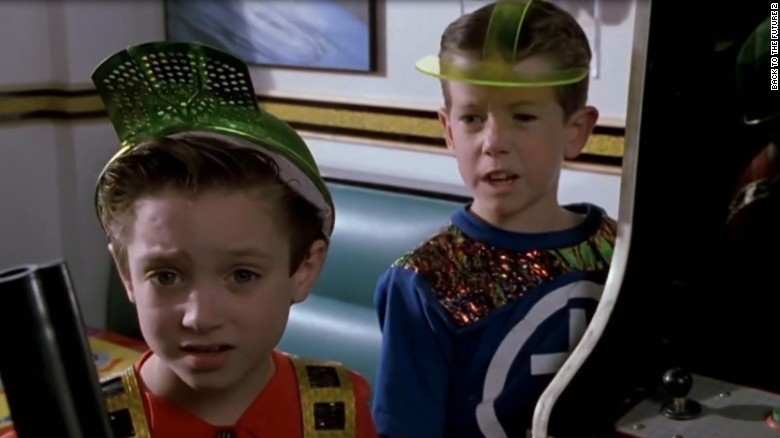 Wood and host Conan O'Brien did single out an item the film got wrong -- the colander-like hat Wood's character wears in the film. They never became fashionable.

Christopher Lloyd on the timeless charm of 'Back to the Future'

There's one prediction that could be aced in the next couple weeks. According to the film, the Chicago Cubs win the World Series in 2015 (over Miami, a city that didn't have a baseball team in 1989).

As of "Back to the Future" Day, those Cubs are in the National League Championship Series, one step short of the big prize.

If they do go all the way, perhaps the Chicago-born Zemeckis won't mind a little score-settling.